I wrote this segment as a part of the recent article I did commenting on the new study for Light Rail in Surrey. The quote from the study that caught my eye and may perhaps catch the eyes of others invested in transit planning, is this prominent suggestion that…

Unlike Rapid Bus or SkyTrain alternatives, the LRT will have a permanent physical presence in their exclusive rights-of-way and yet be at a human scale and have a gentle footprint in keeping with the lower density portions of the lines. (Surrey LRT study)

Notice how the author attempts to justify the Light Rail technology aspect in this way, by suggesting that the “permanent” presence of rail-based transit (i.e. visible rails on the street) has a positive implication on image from riders and developers, that isn’t achieved with Bus Rapid Transit (BRT).

This notion that BRT can have no “permanence” and doesn’t attract economic development is has been challenged by transportation professionals.

Investing in enhancing bus service instead of physical rails on the street is not a failure to create “permanence”. After all, rapid transit improvements are justified in the first place because the demand for the transit on that corridor is already quite high without it.

According to the study, the top predictors in T.O.D. outcomes are not related to the choice of technology; they are:

Clearly, when the outcomes are given similar marketing and promotion, developers don’t actually care if the system uses rails or not.

Here in Canada, York Regional Transit in Ontario, with its “VIVANext” program to implement city-wide BRT, is helping to challenge the popular notion that only rail systems can reinvigorate communities. The video shows vibrant urban communities growing around future BRT stations.

Light Rail is praised by supporters for creating the idea of “permanence” – which has to do with the presence of physical tracks in the streets. The suggestion is supposed to be something along the lines of, “we invested rails in this corridor so that it will never disappear.”

This is a very dangerous myth – and one of the reasons this is dangerous is because of the untold implication, wherein going straight to a Light Rail system results in other parts of the transit system lose transit service, as a means of coping with the associated costs.

Perhaps the best example of this is the downtown streetcar system in Portland, Oregon. The reveled streetcar had vibrant beginnings in its promise to provide a clean, high-quality service every 10 minutes, promoting and connecting new developments in the downtown core.

Its big-ticket issue, however, lies in the fact that it was not planned around actually improving mobility. The resulting service was not significantly more useful than existing city buses, and was often slower than walking or cycling. It was easily and frequently disrupted by accidents, poorly parked cars, and a host of other issues.

Above video: Portland Streetcar gets stuck due to a poorly parked vehicle, in what would be a minor and avoidable adjustment for a bus.

The costs that the streetcar saddled the city with didn’t help the major funding shortages affecting region-wide transit in the late 2000s, resulting in massive service cuts and cancellations throughout the region. It was so bad that in 2009, the regional operator was forced to abolish its entire 15-minute frequent transit network due to lack of funds.

Throughout its history, the streetcar has also received service cutbacks – which arguably challenge the notion that rail has “permanence”. The streetcar has never once operated at the initially promised frequencies of 10 minutes. The cutbacks were initially to the point where you would have to wait as long for a streetcar in the supposedly-vibrant city centre, as you would for a bus in a lower-density part of Surrey.

What is clear about the Portland streetcar example is that the ‘rails’ in the transit lines haven’t made any meaningful difference. They have added so little value, which ends up coming out negative against the funding issues that affected transit service throughout the region.

When the streetcars are unable to run due to an accident or some issue, the replacement shuttle buses are providing essentially the same service as the streetcars. It has had some people thinking whether Portland could follow examples here in Vancouver and in Seattle, launching a well-branded, electric trolley-bus service could have been more suitable for not just the streetcar routes, but other bus routes throughout the city as well. 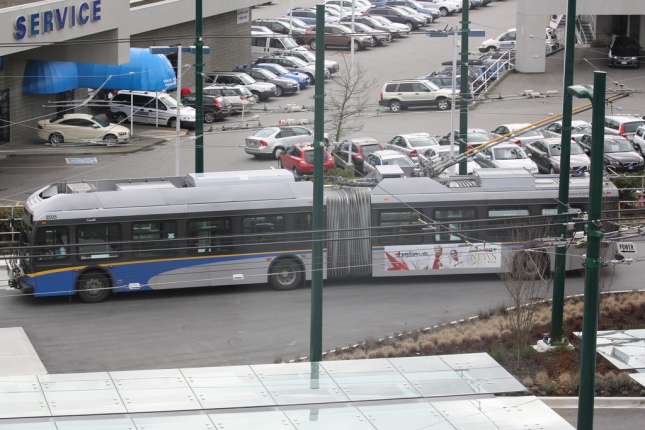 Bridging the gap between BRT and LRT

Recently, consultant Jarrett Walker’s Human Transit blog (which as you’ll notice, I’ve already referenced a few times in this write-up) mentioned that when naturally low-performing local and suburban bus services are excluded from the picture, frequent bus service is nearly as cost-efficient as LRT (in terms of the cost for every rider on the end-service).

Many advocates of LRT would rather have you look at the bus vs LRT operating costs per rider, as they apply to the entire transit system. This creates misleading attitudes surrounding buses, because the numbers include the local and suburban bus services that are naturally poor-performing (and on top of that, will likely never be replaced/justified by an LRT, ever).

The numbers above demonstrate that when you give buses the service quality and frequency usually associated with a more expensive LRT investment, they can be nearly as cost-efficient to operate. Likewise, if buses are also given the same amenities that add to comfort, image and sleekness, then they will likely be appreciated as much by the public.

BRT can receive the same “permanence enhancements” as LRT such as branding, way-finding information, landscaping, lighting, and dedicated rights-of-way. Many BRT systems have adopted innovative features that go a long way towards bridging the gap between BRT and LRT.

BRT advocates often cite examples in South America (such as Bogota, Colombia and others) that use BRT so extensively and so innovatively, that it is considered a replacement for heavy rail. I believe there is another worthy example that deserves some serious attention, and it’s within North America:

“Look ma, no hands”! In Eugene, Oregon, the “Emerald Express” BRT system adopted a magnetically-guided automated steering system, allowing the bus to make more precise turns and dock with precision at every BRT station. The revenue service of this guided system was introduced in June 2013 and is now celebrating its 2nd anniversary.

This guided BRT design allows for reduced lane-width requirements. Steering is automated through the electronic guidance, which only requires pavement under the wheel tracks. This provides an opportunity for the inclusion of additional green space between the tracks. The guided bus technique allows for “precision docking” at the stations.

While the buses do need to be specially equipped, they can still run on other roads. This system does not require the extensive infrastructure and costs of previously-developed “guided” BRT systems, and can in fact save costs by allowing a tighter, narrower running right-of-way for rapid buses.

Where could you go with Bus Rapid Transit? I personally think that a lot of the potential of BRT systems is dismissed not necessarily because of disapproval, but also because the discussion is never really started. You would never be able to travel from King George & 88th and end up in South Surrey or even Coquitlam without transferring, on the currently proposed LRT system. Unfortunately, that’s been pushed out as a key consideration in transit planning here.

The Emerald Express is an excellent example of how current technology can be used to bridge the gap between BRT and LRT. And, on top of the examples showed in Eugene, there are so many other ways to “bridge the gaps”.

At this point, basically every heavily-promoted LRT feature can be replicated with BRT (and likewise, every streetcar feature with buses). Well-designed BRT systems incorporate lements such as: sheltered stations with wait-time displays, off-board payment, seating and other amenities adding comfort and ambiance. Hybrid diesel-electric or electric trolley buses can be used to lower or eliminate carbon emissions – and provide the smoother, non-jerky ride quality of electric vehicles. Plus, double-articulated buses are increasingly being used – giving a little more flexibility in terms of capacity (Light Rail’s current running advantage).

If BRT can gain more traction in this decade, it will pave the way for much better transit in all our cities, because BRT costs a lot less to implement, and has numerous flexibility advantages over Light Rail systems in urban settings. You could build more BRT than an LRT with the same dollar, and extend its reach further by through-running onto other corridors.

In order for this to happen, transit advocates must abandon any and all adherence to the “only rail creates development” myth. The fear-mongering, excuses and nay-saying from pro-LRT activists is becoming a serious setback to the realization of transit potential in our cities.

My concept of rapid bus service instead of LRT on King George Blvd/104 Ave in Surrey. Note the continuation of 3 different services to allow direct connections to Cloverdale, Coquitlam and other communities. Through-running flexibility is a major BRT advantage that won’t be had by currently-proposed LRT.

3 thoughts on “The “Only rail creates development” myth”