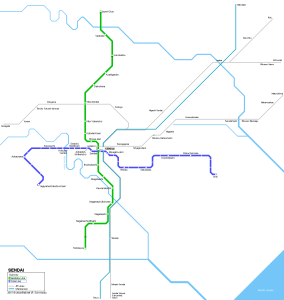 The sun is rising over a quiet city, where the lights inside 13 new rapid transit stations turn on and the first station staff make their way down the relatively unused escalators to prepare to open the platforms for the first wave of customers.

The familiar hum of a linear induction motor system populates the station as the first of 15 four-car trains rolls in from the maintenance yard, ready to board passengers for the first service of the day.

If you think I’m describing an event in Vancouver, you would be wrong because I am describing what’s happening right now in a major Japanese city, one that decided to build a brand new rapid transit line with the same SkyTrain technology developed in Canada and pioneered here in Vancouver.

Sendai, Japan is the city that was hit hard during the March 11, 2011 Tohoku earthquake and tsunami. The completion of the new Tozai Line, a 14km rapid transit subway with both underground and elevated stations, has turned the page for the city, marking its vibrance and prosperity as it progresses in its recovery from the devastation of 4 years ago.

I went back to Sendai for a business trip, and it also happened to be the day the Tozai line opened to the public. It was crazy! The city and its people are treating it like a big event!
-Ryukyurhymer from Skyscrapercity (LINK)

Videos and photos of the launch celebrations show thousands of people making use of the new system, and celebrations ranging from idol girl groups performing on the station platforms, local sports team mascots out to celebrate, men in samurai outfits, traditional dance performances on board the trains, and picnics at the park beside the train’s visible elevated section. It is a lively hustle and bustle and the mood appears to be as festive as when I visited Sendai just 4 months ago to attend the city’s most famous Tanabata Festival, as part of my 1-year Japan studies journey. It is arguably the biggest occurrence in the city since this August and the biggest revolution for the city since the first steps in recovery were made after 2011. 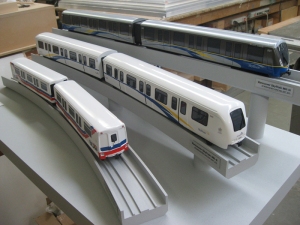 SkyTrain technology was developed in Canada and pioneered right here in Vancouver.

Since the first km of demonstration track opened in early 1983 here in Vancouver, SkyTrain technology has made its way around the world with just over 20 systems complete or being proposed in 15 cities worldwide. We have reinvested in it and expanded our system several times, yet we’ve been overtaken by a certain Guangzhou, China that has made a monstrous investment in this technology with over 99km of track – reaching 130km by next year.

Sendai’s will to revitalize their city with the help of a technology pioneered here in Vancouver, Canada should be seen as a wonderful treat and a mark of our contributions to this technology’s progress, and a reminder of the big impacts we can make with choices that we would otherwise deem irrelevant. Sendai’s choice of SkyTrain technology will help the city fast-track its ongoing recovery from the events of 4 years ago.

The line will serve 80,000 riders a day next year, with an additional 3% more estimated to come each year and grow the system’s ridership. According to the schedule on the city’s website, trains will run every 3-4 minutes during peak hours and no less frequently than every 7.5 minutes at off-peak times and weekends – an excellent service standard for a medium-sized city of 1 million people.

In an area around Arai Station, work to establish a new community of nearly 20,000 people is progressing. Public apartments have been built for those affected by the tsunami, with people moving there from areas closer to the Pacific coast as part of a collective relocation program. (The Japan Times)

As a result of the practical research for three years from Fiscal 1985, we confirmed that low-cost subway “Linear Metro” that has been developed as a public transport is suitable for regional hub city as a semi-main metropolitan line or branch line. For this reason, the Japan Subway Association established the “Linear Metro Promotion Headquarters” within the association in October 1988.

Japanese researchers started studying linear induction motors (LIMs) as train propulsion in 1985. After Osaka built Japan’s first LIM line (the Nagahori Tsurumi-Ryokuchi line), it was found that the city had saved approximately 20% in construction costs. This is one of the key advantages that come with LIMs – the less-complicated motors enable trains to have lower platform heights, which  means tunnels can be significantly smaller and less costly without impacting the quality of service. There is no doubt that with the majority of Sendai’s new subway line tunneled, millions in cost savings were found with the use of SkyTrain technology.

This same advantage was directly to blame for the use of an existing railway tunnel on our Expo Line SkyTrain downtown, a choice that saved us hundreds of millions of dollars as a traditional light rail system would have required new and larger tunnels to be dug under our downtown core.

“The new line is a symbol of development for the disaster-hit Arai district. I hope the Tozai Line will play a major role in leading the city.”
– Emiko Okuyama, Mayor of Sendai (The Japan Times)

Sendai’s system brings the amount of in-service SkyTrain technology systems from 17 to 18. 14 cities/areas are currently using SkyTrain technology, and a 15th (Okinawa Island, also in Japan) has declared its use for a major future transit investment.

I am pleased to hear about and report on this successful launch, and I encourage all of us in Vancouver to cheer this Japanese city and its people in celebrating a brand new era of progress and motion.